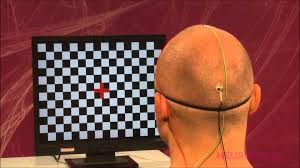 What is.... Evoked Potential?
An evoked potential or evoked response is an electrical potential recorded from the nervous system of a human or other animal following presentation of a stimulus, as distinct from spontaneous potentials as detected by electroencephalography (EEG), electromyography (EMG), or other electrophysiologic recording method. Such potentials are useful for electrodiagnosis and monitoring.
Evoked potential amplitudes tend to be low, ranging from less than a microvolt to several microvolts, compared to tens of microvolts for EEG, millivolts for EMG, and often close to a volt for ECG. To resolve these low-amplitude potentials against the background of ongoing EEG, ECG, EMG, and other biological signals and ambient noise, signal averaging is usually required. The signal is time-locked to the stimulus and most of the noise occurs randomly, allowing the noise to be averaged out with averaging of repeated responses.[1]
Signals can be recorded from cerebral cortex, brain stem, spinal cord and peripheral nerves. Usually the term "evoked potential" is reserved for responses involving either recording from, or stimulation of, central nervous system structures. Thus evoked compound motor action potentials (CMAP) or sensory nerve action potentials (SNAP) as used in nerve conduction studies (NCS) are generally not thought of as evoked potentials, though they do meet the above definition.