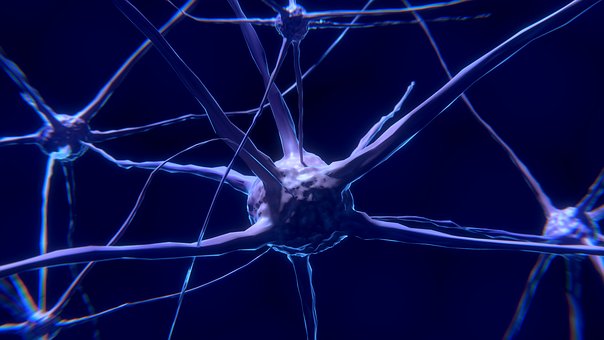 Physical basis[edit]The membrane potential in a cell derives ultimately from two factors: electrical force and diffusion. Electrical force arises from the mutual attraction between particles with opposite electrical charges (positive and negative) and the mutual repulsion between particles with the same type of charge (both positive or both negative). Diffusion arises from the statistical tendency of particles to redistribute from regions where they are highly concentrated to regions where the concentration is low (due to thermal energy).
Voltage[edit]Main article: Voltage

Electric field (arrows) and contours of constant voltage created by a pair of oppositely charged objects. The electric field is at right angles to the voltage contours, and the field is strongest where the spacing between contours is the smallest.Voltage, which is synonymous with difference in electrical potential, is the ability to drive an electric current across a resistance. Indeed, the simplest definition of a voltage is given by Ohm's law: V=IR, where V is voltage, I is current and R is resistance. If a voltage source such as a battery is placed in an electrical circuit, the higher the voltage of the source the greater the amount of current that it will drive across the available resistance. The functional significance of voltage lies only in potential differences between two points in a circuit. The idea of a voltage at a single point is meaningless. It is conventional in electronics to assign a voltage of zero to some arbitrarily chosen element of the circuit, and then assign voltages for other elements measured relative to that zero point. There is no significance in which element is chosen as the zero point—the function of a circuit depends only on the differences not on voltages per se. However, in most cases and by convention, the zero level is most often assigned to the portion of a circuit that is in contact with ground.
The same principle applies to voltage in cell biology. In electrically active tissue, the potential difference between any two points can be measured by inserting an electrode at each point, for example one inside and one outside the cell, and connecting both electrodes to the leads of what is in essence a specialized voltmeter. By convention, the zero potential value is assigned to the outside of the cell and the sign of the potential difference between the outside and the inside is determined by the potential of the inside relative to the outside zero.
In mathematical terms, the definition of voltage begins with the concept of an electric field E, a vector field assigning a magnitude and direction to each point in space. In many situations, the electric field is a conservative field, which means that it can be expressed as the gradient of a scalar function V, that is, E = –∇V. This scalar field V is referred to as the voltage distribution. Note that the definition allows for an arbitrary constant of integration—this is why absolute values of voltage are not meaningful. In general, electric fields can be treated as conservative only if magnetic fields do not significantly influence them, but this condition usually applies well to biological tissue.
Because the electric field is the gradient of the voltage distribution, rapid changes in voltage within a small region imply a strong electric field; on the converse, if the voltage remains approximately the same over a large region, the electric fields in that region must be weak. A strong electric field, equivalent to a strong voltage gradient, implies that a strong force is exerted on any charged particles that lie within the region.
Ions and the forces driving their motion[edit]Main articles: Ion, Diffusion, Electrochemical gradient, and Electrophoretic mobility

Despite the small differences in their radii,[12] ions rarely go through the "wrong" channel. For example, sodium or calcium ions rarely pass through a potassium channel.Ion channels are integral membrane proteins with a pore through which ions can travel between extracellular space and cell interior. Most channels are specific (selective) for one ion; for example, most potassium channels are characterized by 1000:1 selectivity ratio for potassium over sodium, though potassium and sodium ions have the same charge and differ only slightly in their radius. The channel pore is typically so small that ions must pass through it in single-file order.[13] Channel pores can be either open or closed for ion passage, although a number of channels demonstrate various sub-conductance levels. When a channel is open, ions permeate through the channel pore down the transmembrane concentration gradient for that particular ion. Rate of ionic flow through the channel, i.e. single-channel current amplitude, is determined by the maximum channel conductance and electrochemical driving force for that ion, which is the difference between the instantaneous value of the membrane potential and the value of the reversal potential.[14]

Depiction of the open potassium channel, with the potassium ion shown in purple in the middle, and hydrogen atoms omitted. When the channel is closed, the passage is blocked.A channel may have several different states (corresponding to different conformations of the protein), but each such state is either open or closed. In general, closed states correspond either to a contraction of the pore—making it impassable to the ion—or to a separate part of the protein, stoppering the pore. For example, the voltage-dependent sodium channel undergoes inactivation, in which a portion of the protein swings into the pore, sealing it.[15] This inactivation shuts off the sodium current and plays a critical role in the action potential.
Ion channels can be classified by how they respond to their environment.[16] For example, the ion channels involved in the action potential are voltage-sensitive channels; they open and close in response to the voltage across the membrane. Ligand-gated channels form another important class; these ion channels open and close in response to the binding of a ligand molecule, such as a neurotransmitter. Other ion channels open and close with mechanical forces. Still other ion channels—such as those of sensory neurons—open and close in response to other stimuli, such as light, temperature or pressure.
Leakage channels[edit]Leakage channels are the simplest type of ion channel, in that their permeability is more or less constant. The types of leakage channels that have the greatest significance in neurons are potassium and chloride channels. It should be noted that even these are not perfectly constant in their properties: First, most of them are voltage-dependent in the sense that they conduct better in one direction than the other (in other words, they are rectifiers); second, some of them are capable of being shut off by chemical ligands even though they do not require ligands in order to operate.
Ligand-gated channels[edit]

Ligand-gated calcium channel in closed and open statesLigand-gated ion channels are channels whose permeability is greatly increased when some type of chemical ligand binds to the protein structure. Animal cells contain hundreds, if not thousands, of types of these. A large subset function as neurotransmitter receptors—they occur at postsynaptic sites, and the chemical ligand that gates them is released by the presynaptic axon terminal. One example of this type is the AMPA receptor, a receptor for the neurotransmitter glutamate that when activated allows passage of sodium and potassium ions. Another example is the GABAA receptor, a receptor for the neurotransmitter GABA that when activated allows passage of chloride ions.
Neurotransmitter receptors are activated by ligands that appear in the extracellular area, but there are other types of ligand-gated channels that are controlled by interactions on the intracellular side.
Voltage-dependent channels[edit]Voltage-gated ion channels, also known as voltage dependent ion channels, are channels whose permeability is influenced by the membrane potential. They form another very large group, with each member having a particular ion selectivity and a particular voltage dependence. Many are also time-dependent—in other words, they do not respond immediately to a voltage change but only after a delay.
One of the most important members of this group is a type of voltage-gated sodium channel that underlies action potentials—these are sometimes called Hodgkin-Huxley sodium channels because they were initially characterized by Alan Lloyd Hodgkin and Andrew Huxley in their Nobel Prize-winning studies of the physiology of the action potential. The channel is closed at the resting voltage level, but opens abruptly when the voltage exceeds a certain threshold, allowing a large influx of sodium ions that produces a very rapid change in the membrane potential. Recovery from an action potential is partly dependent on a type of voltage-gated potassium channel that is closed at the resting voltage level but opens as a consequence of the large voltage change produced during the action potential.
Reversal potential[edit]The reversal potential (or equilibrium potential) of an ion is the value of transmembrane voltage at which diffusive and electrical forces counterbalance, so that there is no net ion flow across the membrane. This means that the transmembrane voltage exactly opposes the force of diffusion of the ion, such that the net current of the ion across the membrane is zero and unchanging. The reversal potential is important because it gives the voltage that acts on channels permeable to that ion—in other words, it gives the voltage that the ion concentration gradient generates when it acts as a battery.
The equilibrium potential of a particular ion is usually designated by the notation Eion.The equilibrium potential for any ion can be calculated using the Nernst equation.[17] For example, reversal potential for potassium ions will be as follows:
{\displaystyle E_{eq,K^{+}}={\frac {RT}{zF}}\ln {\frac {[K^{+}]_{o}}{[K^{+}]_{i}}},}where
Even if two different ions have the same charge (i.e., K+ and Na+), they can still have very different equilibrium potentials, provided their outside and/or inside concentrations differ. Take, for example, the equilibrium potentials of potassium and sodium in neurons. The potassium equilibrium potential EK is −84 mV with 5 mM potassium outside and 140 mM inside. On the other hand, the sodium equilibrium potential, ENa, is approximately +66 mV with approximately 12 mM sodium inside and 140 mM outside.[note 1]
Changes to membrane potential during development[edit]A neuron’s resting membrane potential actually changes during the development of an organism. In order for a neuron to eventually adopt its full adult function, its potential must be tightly regulated during development. As an organism progresses through development the resting membrane potential becomes more negative.[18] Glial cells are also differentiating and proliferating as development progresses in the brain.[19] The addition of these glial cells increases the organism’s ability to regulate extracellular potassium. The drop in extracellular potassium can lead to a decrease in membrane potential of 35 mV.[20]
Equivalent circuit[edit]
Equivalent circuit for a patch of membrane, consisting of a fixed capacitance in parallel with four pathways each containing a battery in series with a variable conductanceElectrophysiologists model the effects of ionic concentration differences, ion channels, and membrane capacitance in terms of an equivalent circuit, which is intended to represent the electrical properties of a small patch of membrane. The equivalent circuit consists of a capacitor in parallel with four pathways each consisting of a battery in series with a variable conductance. The capacitance is determined by the properties of the lipid bilayer, and is taken to be fixed. Each of the four parallel pathways comes from one of the principal ions, sodium, potassium, chloride, and calcium. The voltage of each ionic pathway is determined by the concentrations of the ion on each side of the membrane; see the Reversal potential section above. The conductance of each ionic pathway at any point in time is determined by the states of all the ion channels that are potentially permeable to that ion, including leakage channels, ligand-gated channels, and voltage-gated ion channels.